New Democrats, like most British Columbians, want to see an LNG industry that protects our air, land and water, including our climate change commitments. But the premier’s LNG deal lets Petronas help write its own environmental regulations. 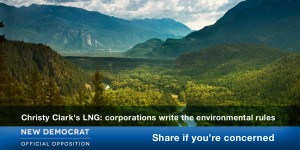 Quote from New Democrat spokesperson on the environment Spencer Chandra Herbert:
“The Premier has utterly failed to get an agreement that benefits British Columbia. This deal shows she’s willing to sell out our environment, and to ignore our urgent need to drive down climate change emissions now and in the years ahead. It’s clear Petronas calls the tune and this government jumps, leaving our land, air, water, and climate to suffer.”